As time went on, the McFerrens continued to naively call upon the Department of Justice and FBI when battling the closely-knit band of white authorities that ruled Fayette County and West Tennessee. But it was John McFerren’s well recorded encounters with Hoover’s men in April of 1968 that Randall Stephens was most interested in.

In the predawn hours of Monday, April 8, 1968, McFerren found himself sitting across from several men inside room 561 at the Peabody Hotel in Memphis. Along with McFerren’s friend and civil rights comrade Baxton Bryant, the group included Memphis Attorney David E. Caywood, FBI Special Agent Orville Vernon Johnson, Memphis Police Inspector N.E. Zachery, and the newly appointed Memphis Police Director, Frank Holloman. As fate would have it, former Special Agent in Charge Holloman was already familiar with McFerren due to the two men’s opposition in the FBI’s 1959 civil rights investigation. To Stephens, this prior contention was sufficient cause to believe that Holloman would have been biased against McFerren and the information he eventually provided. Nevertheless, McFerren went on to furnish Holloman and the other law enforcement officials in the room that morning with the following details.

According to the redacted FBI report obtained by Stephens, McFerren stated that approximately a week before the assassination of Dr. Martin Luther King Jr., he overheard several men making incendiary remarks about King while gathered together at the Liberto, Liberto, and Latch Produce Company at the 814 Scott Street farmer’s market in Memphis. McFerren claimed that the owner of the LL&L Produce Company, a man McFerren believed to be of possible “Puerto Rican extraction” who had gapped teeth and weighed approximately 300 lbs., could be heard barking to four other men, “They ought to shoot the son-of-a-bitch.” When the truculent produce owner then turned his attention to McFerren and asked, “What do you think about King and his mess?”, McFerren humbly replied, “I tend to my own business.”

McFerren also furnished the MPD and FBI investigators that morning with information on two additional conversations he had overheard at the warehouse, this time occurring on the very day of King’s shooting. McFerren claimed that on Thursday morning, April 4, 1968, he again made his weekly trip from Somerville to Memphis with the intention of purchasing supplies to stock his grocery store with. At approximately 4:20pm, he began driving toward his last stop of the day, the same 814 Scott Street market he had patronized the week earlier. After purchasing a sack of potatoes from one of the market’s small outdoor vendors, McFerren parked his vehicle and walked into the LL&L warehouse at approximately 4:45pm.

As he entered the building through the large dock entrance, McFerren peered through the small open door just off to his right and witnessed the same heavyset owner sitting at a desk inside the building’s main office. McFerren noted that the heavyset man was speaking on the telephone at the time and had not noticed McFerren walk up behind him. In that instant, McFerren heard the heavyset man scream into the telephone, “Kill the son-of-a-bitch on the balcony and get the job done. You will get your $5,000.”

Without warning, the second owner of the business, a thin white man with a scar on his right cheek, came around the corner and confronted McFerren. When asked what he was doing there, McFerren simply replied that he wanted to buy some produce. After being told to help himself, the unassuming McFerren proceeded to the back of the warehouse to pick out his items. Only a few minutes later, while perusing the assortment of fruits and vegetables, McFerren heard the loud ring of the office telephone echo throughout the building. This time, the thin white man with the scar could be overheard picking up the receiver and answering the call.

While it was unclear what was said by the thin man to the caller, it was evident to McFerren that the phone receiver was quickly handed off to the heavyset man. It was then that McFerren overheard yet a second heated telephone exchange. Once again screaming, the heavyset business owner told the caller, “Don’t come out here. Go to New Orleans and get your money. You know my brother.”

At the conclusion of the second, albeit brief telephone conversation, McFerren approached the office to ask the scarred man about purchasing two bushels of apples. After being told that he would have to buy them elsewhere, McFerren quickly paid for his items, departed the building, and began the hour-long drive back to Somerville. According to his calculations, McFerren was inside the Scott Street warehouse approximately ten minutes that day, heard both telephone conversations sometime between 4:45pm and 5:15pm, and was back at his Somerville store by 6:15pm when he learned of the shooting of Dr. King. 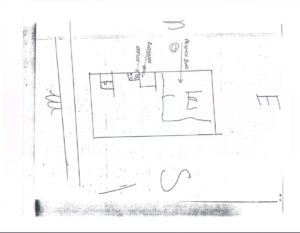 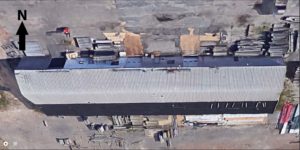 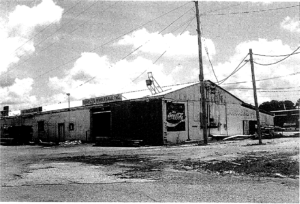