In 1956, under the authority of Director J. Edgar Hoover, the Federal Bureau of Investigation initiated the now highly controversial Counter Intelligence Program or “COINTELPRO”. In a paranoid effort to combat political and social organizations he deemed as communist, radical, or subversive, Hoover authorized FBI field offices throughout the country to conduct covert and often-illegal surveillance on United States citizens. Just a few years after its inception, African Americans living in Fayette County became the target of this secret surveillance program.

By August of 1959, John McFerren and his wife Viola had taken up their own crosses in the local civil rights movement by leading a voter registration drive on behalf of Fayette’s black residents. But their push to upend the white establishment’s hold on local politics quickly caught the fearful attention of government officials in Somerville, the Fayette County Sheriff’s Department, and the FBI field office in Memphis.

Randall Stephens uncovered his first clue regarding the McFerren’s acrimonious relationship with Hoover’s bureau in a stack of newspaper clippings published in September and October of 1959. In the articles, members of the Memphis FBI, including Special Agent Franklin Johnson and Special Agent in Charge Frank Holloman, were accused by McFerren attorney James F. Estes of secretly using their positions as federal civil rights investigators to spy on the area’s black activists. The articles went onto claim that personal information provided by the activists to SA Johnson had made its way into the hands of the county’s often-racist opposition, specifically the local sheriff’s department. Ultimately, both SA Johnson and SAC Holloman were removed by the Department of Justice from the Fayette County voter registration enquiry and replaced by other agents.

While it was not completely evident to Attorney Estes and the other activists at the time, their belief that the FBI was colluding with the county sheriff’s department had merit. According to several FBI memos discovered by Stephens, Fayette County Sheriff C.E. Pattat Jr. did eventually coordinate with the bureau in a combined effort to spy on the county’s black citizens. In one example dated January 29, 1961, Sheriff Pattat called the Memphis FBI field office to advise them that several out-of-town whites had traveled to Somerville to assist the local activists. In the three-page memo, the license plate numbers, names, campus activities, and political leanings of the five Michigan college students were eventually investigated and thoroughly detailed by the bureau based on the information provided by Pattat. 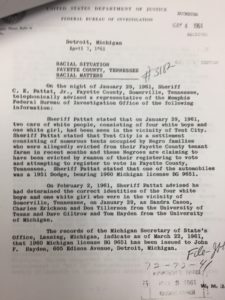 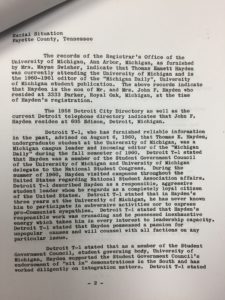 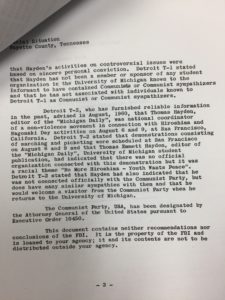